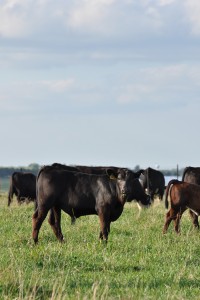 Mob grazing incorporates very high stocking rates with planned, daily moves to fresh pasture, followed by periods of rest of 60 days or more. The benefits of mob grazing are numerous, including increases in soil organic matter, soil microbial life, plant species, wildlife and the pounds that can be produced per acre. Mob grazing also decreases weed pressure (although our definition of a weed and yours may differ), water run off, and ultimately our cost of production.
We want the cows to touch every plant in the paddock that they are moved through with either their mouth or their feet. When eaten, we only want them to take on bite off the top of the plant. Then grass is then processed through digestion, the result is, well, you know. When the cows step on it, the plant material comes into contact with the soil, allowing for quick composting by the increased microbial life, and carbon sequestration.
Fast forward to the next day, when the cows are in a new fresh paddock. The plant life was shocked by being eaten or trampled on. New growth is stimulated, and because only the top 1/3 or the plant was eaten, there are leaves left to capture sunlight. The plant rebounds quickly, and because not as much energy is required to grow new leaves, new roots are grown, increasing the organic matter deeper in the soil, creating a sponge, that absorbs rain when it comes pulling it deep into the soil for future use. And because it won’t see any grazing pressure for 60 days or more, the plant can reach its maximum growth potential.
This natural cycle mimics the buffalo herds of long ago, and with mob grazing different species of grass are encouraged to grow, from seeds stored in the soil for years and years. The increased number of plant species increases pressure on the opportunistic weeds, snuffing them out. The amount of wildlife greatly increases as well. From large flocks of pheasants and gold finches, to foxes, mink and weasels.
And about our definition of a weed; many consider a weed anything that wasn’t planted. If this was the case, half of our pasture would be considered weeds, as it wasn’t planted, but given an opportunity to grow in ideal conditions. For us, a weed is anything that the cows won’t eat, and that list isn’t very long.
For the majority of the year, all animals are ran together as a single unit, minus a few months out of the year when the bulls are kept out of the herd, thus controlling our calving season. Calves are weaned naturally, by their mothers, greatly decreasing stress on our young animals and increasing our weight gain on the young animals through the winter.
We try not to feed additional hay in the winter either. We live in Iowa and get some nasty weather, but the cows will eat the longer, stockpiled grass through the winter and still have access to fresh water out in the pasture. 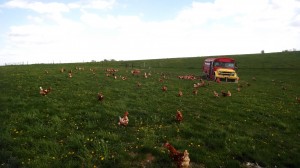 We also raise broilers-because who doesn’t like chicken? The broilers are allowed access to grass everyday but are confined in a large fenced in area due to the increase in natural predators. The animals are supplemented with non-GMO grain. Being on grass allows the animals to express their chicken-ness more than if they were confined in a building.
Chickens raised this way also taste different. You won’t find a spongy tasteless chicken breast, but rather a piece of meat that has some substance and flavor. Raising them this way also allows us to concentrate the chicken litter in certain parts of the pasture that may need a boost nutritionally. 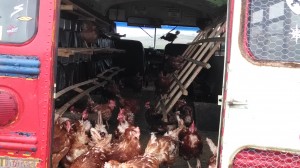 Another facet of our operation includes free range eggs. Our laying hens are the janitors of our pasture. They closely follow the cows, sleeping and laying their eggs in a converted school bus. During the day, they are outside going wherever they feel like going (our neighbors have a few pet chickens now!).
Behind the cows, they scratch through the cow pats, searching for bugs and earth worms that live in the nutrient rich manure. While searching for these little creatures, they spread the cow pats all over the place, effectively spreading the nutrients around. They also will pick off the leaves from the plants that the cows left behind.
These birds provide a beneficial partnership for all. The cows see decreased pressure from flies and parasites. The chickens consume less non-GMO grain than conventionally raised chickens. We getting beautiful brown eggs with an orange yolk, the likes of which most people have never seen.